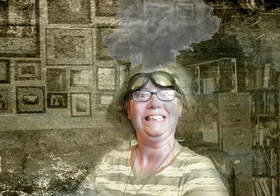 Coleen Frazer-Hambrick is a writer, photographer and and filmmaker who, together with her husband, John, has raised three boys in Oklahoma.

In 2013 she felt called by the Lord Jesus to write a screen play and start filming Shots in the Dark, a story she'd written in novel form.

After finishing the screen play, a team was provided for her and she and her husband began the arduous task of shooting scenes and editing the movie. The Cast/Crew of Shots in the Dark are amazing people who are patient and who see the vision of the movie. Frazer-Hambrick feels it is a joy to work with these folks.

The production team hopes to have the production side of the film done soon, but for now, they have created a trailer for the movie, which is below.